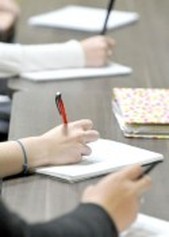 When Doug Stanton was a young student and aspiring author, a local Traverse City, Michigan, benefactor offered to help fund his final year at Interlochen Arts Academy, where he was a creative writing and theater major. “Having such an experience when I was a teenager,” says Stanton, “literally changed my life. I’ve never forgotten how fortunate I was to be taken seriously by practicing writers at such a young age.” He also never forgot the generous goodwill of the benefactor, Mrs. Helen Osterlin.

Inspired by that experience, and motivated by a belief that “we can pitch in and, inexpensively, make our public schools richer places,” in 2010 Stanton announced to a sold-out National Writers Series audience that he wanted to create, in downtown Traverse City, a free creative writing program for high school students– like the one he had been fortunate to enjoy. The National Writers Series had just awarded its first scholarships to college-bound high school students (during the 2012-2013 academic year, these awards will total more than $20,000), and the moment for making such a proclamation could not have been better-timed. Traverse City Area Public Schools board president Gary Appel was in the City Opera House audience that night and he immediately expressed his support for such a program. He assisted in initiating important conversations with other TCAPS officials, including superintendent Stephen Cousins, who offered key support. Cousins asked Traverse City West High School assistant principal Stephanie Long to form an inaugural steering committee. Thus was born the Front Street Writers Studio Program in creative writing.

On September 5, 2012 –just two years after Stanton announced his idea to that packed room–  the National Writers Series and Traverse City Public Schools launched Front Street Writers, a for-credit, tuition-free, and rigorous creative writing program for public high school students. Led by publishing writers-in-residence, enthusiastic Traverse City Area Public School teachers, and NWS’s nationally renowned guest authors who conduct master classes with the students, the program treats the young writer as a serious artist and as a working professional. This is done with the belief that the creation of literature is an important, stimulating way of life and a way to forge a rewarding livelihood. The Front Street Writers studio is located at 123 W. Front Street in downtown Traverse City, Michigan, in a nearly 4,000 square foot creative learning studio. Because of a generous donation from Steelcase and Jonathan and Marissa Wege, the stylish, state of the art building is equipped to accommodate classroom-style teaching, in-the-round workshops, formal readings, and interactive story editing. “We’re convinced,” says Stanton, “that walking through these doors are the authors of the stories you’ll be reading tomorrow–the fiction writers, poets, script writers, and journalists of the future. We look forward to welcoming them back to the National Writers Series stage, when they have published books of their own.